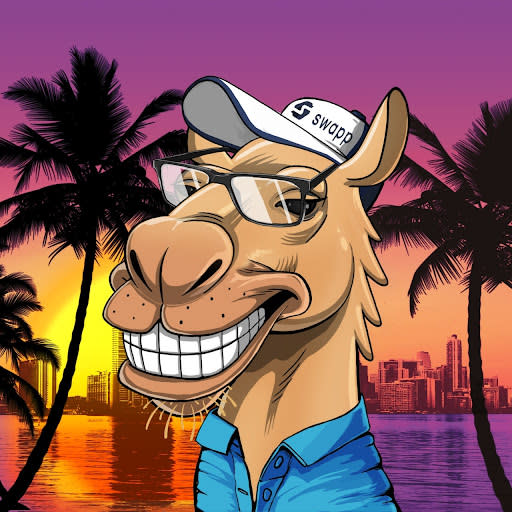 “Antara” becomes the first major Hollywood film to be funded by an NFT; Music by duo Ayo & Teo and assistance from Hollywood producers Josef Brandmaier and Matthew Joynes and TV personality and brand consultant for the swap protocol Larsa Pippen

DUBAI, UAE, Jan. 14, 2022 (GLOBE NEWSWIRE) — (via Blockchain Wire) Arabian Camels, an NFT community revolutionizing the film industry, today announced the pre-sale of the Antara Movie NFT. The presale will begin on January 14, 2022 with the integration of cryptocurrency exchange MoonPay, allowing individuals to buy Ethereum from their official website to enable NFT purchases.

The January 14, 2022 private pre-sale coin is only available to the Arabian Camel Club inner circle. After that, whitelisted areas will be made available to the public. To gain access to the whitelist, aspiring NFT buyers can join the Arabian Camel Discord community for access to the historical NFT drop. Following this historic imprint, the Antara Movie NFT will be the first NFT to allow a buyer to digitally own the rights to a $50 million Hollywood film. In addition, the ownership rights entitle the owners to a portion of the film’s box office and streaming revenue. NFT holders can also earn up to 80% returns on their NFTs from yield farming during film production, only possible through an exclusive DeFi partnership between Arabian Camels and Swapp Protocol.

Arabian camels bend perception in relation to branding strategy and how they offer exclusivity and value to their owners. Due to the symbology behind the camels and the new era they represent, some art galleries around the world are expressing very strong interest in being able to sell the Antara Film NFTs as physical prints with digital backs as well. This would allow large pieces of mantle to be cited as the first paintings in history to offer DeFi yield functionality and depict part of the IP ownership in a Hollywood blockbuster epic of swords and sandals. The film “Antara” will make history as the first major film produced by an NFT, while Arabian Camels will be the first NFT community to produce and partially own the rights to a $50 million Hollywood production .

“The impact Arabian Camels will have on Hollywood is immense. This is an exciting and revolutionary move that will breathe a whole new life into the film business,” said Josef Brandmaier, Producer.

“SC Films supports filmmakers on their artistic journey to realize a film’s full commercial potential. “Antara” is the first Hollywood-financed film as an NFT. Antara is innovative and disruptive of the established financial order controlled by a small Hollywood oligopoly – democratization and decentralization is long overdue,” said Matthew Joynes, producer.

The image for the Antara film NFT is an Arabian camel 2.0 that includes a distinct Hollywood clapper in the upper right corner of the image. For more information on how to own an Antara Movie NFT and join the Arabian Camels Club, visit www.ArabianCamels.io.

The film is the long overdue true story about one of the most revered knights in all of Arab history – Antara Ibn Shaddad. Born a black slave in the ancient Arabian desert, he eventually gained his freedom. He went on to become not only the most dignified knight but also one of the brightest and most respected poets in all of Arab history. The film’s production was carefully put together with the help of Arabic literature professors from Oxford, Cambridge, Yale and the School of Oriental and African Studies, meaning it’s not another Marvel film. The story of Antara is reminiscent of both Alexander the Great and Romeo and Juliet. Its story has been told over and over again for the past 1,500 years. Antara rose to fame in the 6th century, not only for his character and skill on the battlefield, but also for his wondrous talent as a poet. His poetry was so prized that it was sewn in gold and hung on the Kaaba in Mecca before the days of Islam. . To this day, if one studies Arabic literature at Oxford or Cambridge, the poetry of Antara is still studied and revered.

The film was originally set to be shot in Neom, Saudi Arabia; However, as a modern technology hub, Abu Dhabi has also shown keen interest in hosting the film’s production. The production team is currently evaluating which Middle East region is ideal for the crew and production of the film.

Given the immense value of cryptocurrency and community funded movies, celebrities across Hollywood are buying the Antara Movie NFT. Many producers, actors, actresses and financiers buy the Arabian Camel NFT and join the “caravan”. Many people are joining the Arabian Camels community, which is leading the way to the future of Hollywood.

Most recently, Larsa Pippen, TV personality and brand consultant for the Swap Protocol, has joined the Camel Club.

“As a technology and digital currency entrepreneur, I am totally inspired by Antara Movie’s NFT concept, along with the ‘Antara’ storyline itself. The Arabian camels have completely redefined the boundaries of what is possible with NFTs and DeFi ‘ says Pippen.

Ayo and Teo, the famous duo of dancers and musicians, have also joined the Arabian Camels Club and collaborated with them to create an official Camel song to be sold as an NFT. The famous artists appear in Fortnite and Just Dance, and have appeared in music videos for Usher’s “No Limit” and Chris Brown’s “Party.” Her song “Rolex” peaked at #20 on the US Billboard Hot 100 and has nearly a billion views on YouTube. The Camels plan to include the famous and viral sample music “Globglogabgalab” sampled in Kanye West’s “Remote Control” song on his Donda album. Donda initially scored the most first-day streams for an album on both Apple Music and Spotify in 2021. Globglogabgalab music has already gone viral three times. It will be like that again, but this time with the camels.

The Antara Movie NFT is attracting a lot of interest from celebrities and NFT enthusiasts alike. Members of the Arabian Camel NFT community will share the film’s intellectual property, earn roles in the film, be recognized as producers and join the production team for exclusive cast and crew on-set gatherings in the Arabian desert. The differentiation of this NFT project is its real-world utility, which differs from the typical NFT projects of 2021 that are inflated by hype alone. The Arabian camels are now becoming a powerful symbol of what is achievable when crypto communities coalesce in numbers, united by a shared vision.

The Arabian Camels intend to merge films and NFTs with DeFi, gaming and the Metaverse. The community believes it can derive future value from the booming transmedia space while sharing these entertainment qualities with the Arabian Camel community. Future film distributors would pay the owners of the Antara Movie NFT to distribute the film in theaters and/or streaming channels, which is expected to be worth millions of dollars in real terms to the Arab Camel community.

Entering the Metaverse in collaboration with vEmpire

Arabian Camels has also partnered with Dominic Ryder, CEO of vEmpire, whose token recently surged 1500 percent to reach a $100 million market cap. Dominic Ryder’s protocol is in the process of designing and creating the Antara Play-To-Earn game, which has already attracted the attention of a number of prominent venture capital firms. The multiplayer raiding game is expected to firmly embed the Arabian Camels brand and Antara intellectual property in the metaverse and add another layer of value to Arabian Camels owners. The game is intended to bring fun and reliable income to thousands of gamers in developing countries and will depend on a grant model. The Arabian Camels NFTs will be an in-game commodity. At the same time, they will also launch their own gaming token, the in-game currency to be listed on major cryptocurrency exchanges.

Watch the promo video at www.arabiancamels.io

Antara is a feature film, directed by one of Hollywood’s most in-demand directors, that follows the life and adventures of Antara Ibn Shaddad, a desert warrior from ancient pre-Islamic Arabia. The film is the first big-budget film to be funded by an NFT prior to its theatrical and streaming debut, and the first NFT to facilitate this type of royalty sharing. Part of Antara IP, a transmedia rollout, the film is part of a franchise that includes 3 sequels, the crypto-infused multiplayer game Assassin’s Creed Styled, a comic, and a strong brand with a long-term merchandising licensing strategy.

To access the Antara Movie NFT, please go to: